This is a drive by blog. Or rather a train-ride home blog.  Whichever. It’s going to be brief. It has to be. Today is one of those days that was packed from beginning to end,  where you get up at stupidly dark o’clock so that the things that you won’t get around to doing are made up of one or two fewer things.

Why blog?  The books made me do it.

I am not exactly strapped for good books. If anything, there are too many good books. They mock me, saying, “you can try, but you’ll never get through all of us.”  This week, they’ve launched an all-out assault. Three genuinely great books, all quite distinct, and all  released on the same day. Three is the magic number and all that.

Let’s start with small scale first. To wring a little more out of an over-used phrase of mine, let’s get epically intimate.  Kate DiCamillo’s much anticipated follow-up to Raymie Nightingale is out at last and set to charm.  I needn’t say much more; I’ve said it here in this review for the Just Imagine site

Raymie Nightingale was one of those books that most people I recommended it to fell in love with.  Not everyone.  Some said that it did not work for their class, but I never recommended it as a class book.  It’s a book that I think you need to enjoy a one-to-one relationship with.  Connecting with these especially well-drawn characters.  That said, I might be wrong.  Perhaps some of you enjoyed great success with it as a class book.  Prove me wrong.  One of the less celebrated joys of teaching is proving other people wrong from time to time.   Think about it.  In one way or another, I think I might be right.  Louisiana’s Way Home is notably different from Raymie but I still think it is a book best enjoyed on a one-to-one basis.  It’s small scale, looking at the immediate world through big eyes and with plenty of heart.

So a Kate DiCamillo –  that is is a good Thursday by any measure.  What more could you possibly want? 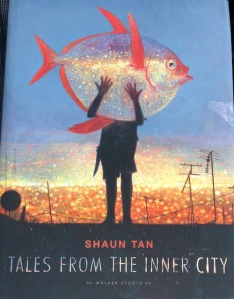 Shaun Tan is another giant of children’s literature but his latest book,  Tales of the Inner City, also released today, is not really for children.  Perhaps a certain kind of child.  A certain kind of child that knows how to keep the odd swear word firmly in the right place (specifically: not venturing forth from innocent lips). Here we move on to a book that widens its lens beyond the immediate surroundings and takes in the sweep and oddities of a landscape in tension. 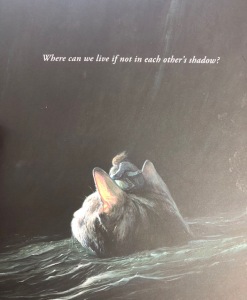 Just holding a new Shaun Tan is cause for celebration.   I am determined not to spoil this very special, thought-provoking book. Still, I have to – and I really do mean have to – give just a few words over to the images within.  The art work is a series of beautiful and puzzling paintings. Much like his earlier Tales of Outer Suburbia, but perhaps more suited to mature readers, this latest book takes a look at those everyday regions that feel neither here not there. They are entirely recognisable – only not so, once Tan has twisted them into somewhat strange, somewhat unsettling new shapes. They look set to fuel an autumn, winter, and perhaps a spring’s worth of thought.

To this I would add that Tan deserves greater recognition as a writer of prose.  Illustrators are sometimes given a raw deal, in terms of how their contribution might be recognised in a co-created book.   As writer and illustrator, more attention is generally given to Tan’s striking, singular imagery.  But he is so good at voice.  It’s there in spades in his earlier Tales of Outer Suburbia that moved with great conviction from incredulous grandchildren, through squabbling brothers, to frantically bewildered turtle rescuer.  It’s here in spades too.  They deserve to be heard. Treat yourself.

The final book of the day was an unexpected bonus.  I’d had Tales of the Inner City on pre-order for a while now (Tan’s Cicada is out in November; feel free to stake an early claim).  I enjoyed the privilege of having an advance copy of Louisiana’s Way Home in order to write my review.  This last book, The Silk Roads, by Peter Frankopan, was a stumbled-upon bonus from a visit to the bookstore. 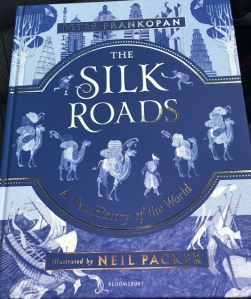 Just a few days ago I had seen a conversation on twitter relating to the (really rather beautiful) A Stone for Sascha by Aaron Becker, the author of the (also really rather beautiful) Journey trilogy.  Not got these books?  No-one has noticed.   Sneak them into your collection while no-one is looking.  They are essential and A Stone for Sascha is one of the best picturebooks of the year.

Here’s a snapshot of the conversation: 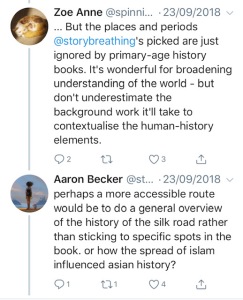 Now look at this screenshot from The Silk Roads: 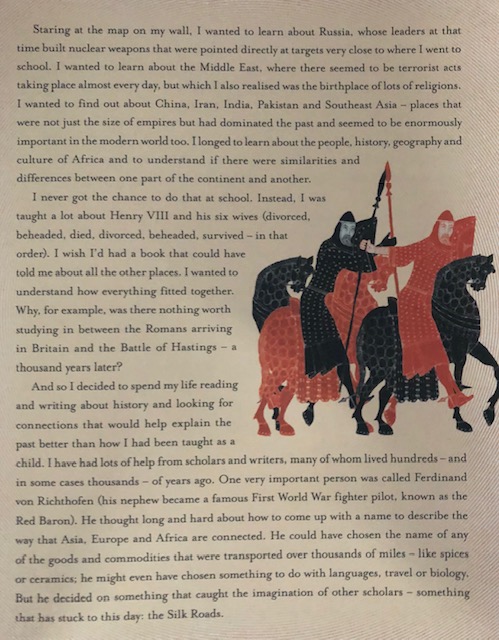 Timely stuff.  And a further leap in scale of vision.  We started small. We went local.  Now we’re heading global – historically, geographically, culturally.  It feels especially welcome right now when some are trying to spin the telescope around on its stand. It’s also timely because for one reason or another, curriculum is firmly -and rightly – on the agenda.  With this come  the sort of questions that we need to engage with if we are to conceive of a genuinely well-balanced and broad curriculum.  Those aren’t just words.

Whose curriculum, for whom?

Which narratives are to be privileged and which will be marginalised?  What will be lifted up to the light; what will be left in the shadows?

The Silk Roads is an especially handsome book, beautifully illustrated by Neil Packer, and it does a very special thing.  It says “open your eyes…wider…wider still.  You’ll learn something.  And then something more.”   Face it, you’ll learn a lot.  You’ll get this world that little bit better.  Who knows where that might take us?  It has a point to make, and many points to plot in space and time.  It’s a challenging read. Rich, expository non-fiction is something that we perhaps cannot get enough of as part of our book provision.  It would make a wonderful addition to your non-fiction offer – chiefly for more mature, proficient readers in upper Key Stage 2.

And that is that. Three books.  Three lenses, from close-up to widescreen.  A very full picture.  A vivid set of pictures.  A whole world of pictures.  An especially rich day.