Rather than mark the end of book week with a book list, or some passing suggestions, I’d rather tell you about one very special book.

Perfect is a big word, isn’t it?  Completed.  Everything in the right place.  I think it applies to Raymie Nightingale – the most satisfyingly ‘complete’ children’s book that I read last year.  A book that you read and every-so-often half close.  You might look up,  or lightly shut your eyes just to take a moment to acknowledge how truly good it is, and then dive back in to the lives that are gently unfolding. 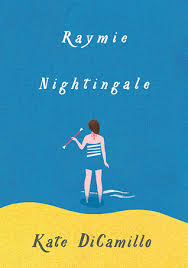 I love Kate DiCamillo’s writing.  I’ve said so many times.   It started with The Miraculous Journey of Edward Tulane which has enjoyed plenty of the right sort of attention elsewhere.  Edward did many of the kinds of thing that I hope a good children’s book might do, so I downloaded all of Kate DiCamillo’s books for older children onto my kindle.  I devoured them in a single, especially enjoyable holiday. From that reading blast, her debut novel Because of Winn Dixie  came out on top as my favourite of her books.  It casts an easy eye on its characters: they are given space to breathe, to say mildly silly/mildly wise stuff, to make mistakes, to upset one another and to patch things up.  Plot, such as it is, comes second to moments that complete the outlines, and finish off the shading of a properly connected and charming set of characters.  They get to be, and feel, as real as you could hope, filtered through an expert’s story telling.

Last year DiCamillo’s latest book, Raymie Nightingale, was released.   It may just be me, but I see Raymie as a kind of elder cousin to Winn Dixie’s Opal.  Like Raymie, Opal is an only child, living in Florida. Unlike Raymie, Opal lives with her father – a kindly preacher.  Raymie? She’d lived with her father and mother – up to a recent point:

It was the fifth day of June.

And two days before, on the third day of June, Raymie Clarke’s father had run away with a woman who was a dental hygienist.

Adults can be such let downs; fortunately children are often more resilient than we tend to give them credit.   Raymie is not willing to let matters lie and soon hatches a plan to draw her otherwise-engaged father back to the family fold.  All she has to do is win [insert fanfare of your choosing] the Little Miss Central Florida Tire competition.  Naturally, ‘her father would see her picture in the paper and come home.’   Simple.

Raymie Nightingale is the ‘simple is sometimes best’ principle at its – ahem – best.   The language is measured in such a way that it packs its punches and offers whispers in all the right places.  It’s really, really funny too.  Adult characters pop in, chew some scenery to vivid, comic effect and then pop back out, sensibly recognising that three, fascinating ten-year-old girls are handling centre stage perfectly well.

I may use perfect once or twice more.  That’ll be my lot.  I promise.

The constructions within are also straightforward. I mention that because we are now moving  in a landscape of lexiles and of heightened expectations around literacy yet anyone (anyone!) that dares to dismiss this book on  the basis of an algorithmic judgement will entirely miss the point and value of this kind of literature.  And shall be spoken to.  I love a literary challenge but the heart asks pleasure first and the soul says ‘thank you’ afterwards.

My heartbeat actually quickened as I typed that last bit.

Raymie Nightingale is a smooth, almost effortless read but you would underestimate that at some cost. Simple moments form the narrative: baton lessons; library visits; swimming lessons; doing a good deed; doing a good deed badly; undoing a good deed done badly. All this life – this early heightened life that is the messy, sickly-sweet cusp of childhood/adolescence. True to such life, small moments feel absolutely huge, and that is the heart of why this book means so much. It shares an interior as much as it does exterior events.  I think that is really important right now.  That introverted child that you might be inclined to fret about?  This book will very likely speak to them. That it can be good to think big about the smallest of things.  That the everyday is worth noticing and lingering on.  That people are funny and hard to figure out, but that it is often – not always – worth trying to.

Amongst the everyday, Raymie Nightingale is littered with the sorts of seismic shifts that hit in the simple course of forming friendships and carving out your place in a newly-uncertain world.  When you are just old enough to really feel things and note the things that are really worth feeling.  When you’re not quite old enough to curb the urge to hide the big stuff – the epically intimate details of what it feels like when you realise: this person/ these people here, they might just be turning into a friend – they’re making me different.  They’re opening up a new set of emotions that are new and exciting and feel dangerous and giddy and – well – that feel like the sum total of everything.

The three of them stood there looking at one another.

Raymie felt something expanding inside her.

This, Raymie knew, was her soul.

Alongside Raymie, DiCamillo has  gathered two perfectly-drawn companions – both as different as the summer is long but both perfectly (there’s that word again) positioned to form a holy trinity of burgeoning, this  ‘feels like life-or-death’ friendship.   Louisiana Elefante, rightly,  has been singled out for special mention here, there and everywhere.  She’s a deceptively quivering creation.  A Southern gothic heroine in child form, with a core of steel that is brought to the surface as the story moves on.  I can imagine a young Sissy Spacek playing her in a film adaptation.  Alongside Louisana, we have Beverly Tapinski – outwardly tough, defiant and not-to-be-messed with.  In theory.  Scratch at the surface, move through the chapters and Beverley’s vulnerabilities, her youthful humanity, comes to the fore.

These three, three-dimensional girls are the real selling point of the book.  The Young Adult market has all manner of nuanced depictions of what it feels to be young, bouncing along that mangled track of simply being teen-aged.  Raymie Nightingale says: “hey, how about a prequel?   I promise it’ll be especially good.”   A book that goes on to say: “these people, in themselves, are worthy of your attention. Grow to love them.  See yourself in them. They’ll call to mind that summer when you were ten/eleven/twelve and you were supposed to be home in time for dinner but, you know, stuff got in the way.”

All too often, children’s books are driven by plot, or humour, or scares or the codes and conventions of an imagined world – all of this fine and dandy by me. These books might, in the classroom, be used to explore writing technique or devices.  They may be mimicked or adapted.  Raymie Nightingale is unlikely to perform in his way.  It may however help your children to be more insightful, perceptive – dare I say interesting – writers. Regardless, a book should not be measured by how many composition exercises it might lend itself to.

Raymie Nightingale deserves a place in all school libraries. Your library should consider itself lucky to be graced by its presence.   It’s the sort of book that I think all children would enjoy reading. For some though – who really happen to need a book like this in their lives – it might just cement a place as a lifetime favourite.  A pivotal moment in their reading journey.

(I haven’t mentioned the author’s note at the end.  Don’t skip to it. It has its own dose of magic that works just where it is.  No sooner).

9 thoughts on “Written from the heart: Kate DiCamillo’s Raymie Nightingale”